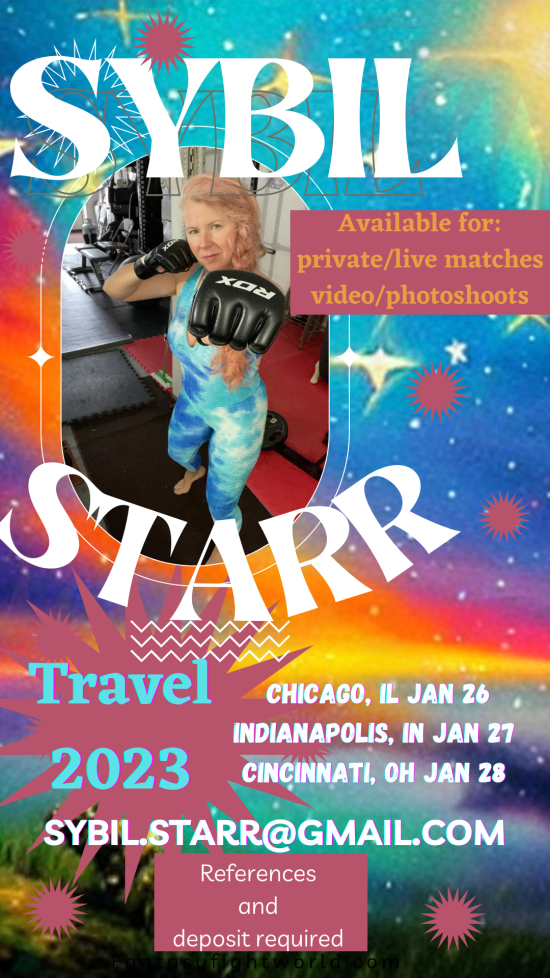 This is a long one. I apologize for the length and any boredom induced.

This review is the most difficult one I’ve ever written. It took me a couple of weeks to gather the words to describe my experience. I guess it would be a daunting task to describe how it is like to be in the presence of a LIVING LEGEND! However, I’m going to try. So, where to began? I guess as usual, at the beginning. LOL!

I actually planned on making a trip some time in the new year to Michigan but when I heard that she was traveling to the DC area I leaped at the opportunity to contact her. We shared a few messages back and forth. I’ll admit I had to be patient with receiving responses. This was not a issue. I must have emailed her in the middle of her planning. I did messaged her a couple of weeks in advance. I guess I was a little too excited! After a couple more exchanges we were able to lock down a time and date. Now, the real FUN (emphasis intended) begins!

First, she choose an Amazing location! I mean PERFECT! It was in a remote pocket that was only 25 minutes away from DC city limits and 15-20 Minutes away from where I live! Sybil found a close yet remote and private location in one of the most public cities in the Nation! As a native and lifelong resident I was already blown away! I knew this session would be one I would NEVER forget! I just commend our Starr (pun intended) on a often understated feature of sessions and sessioning: Location! The room was also nice, clean and cozy without being cramped. My apologies for being so episodic I’m just incredibly impressed by this attention to this detail.

On to more juicy bits! When I arrived to our location I was greeted at the door of the hotel. I attempted to
apologize for being late. Sybil didn’t even allow me the opportunity. Instead, she greeted me with a warmth and sincerity I haven’t felt in a long time. She gave a great big warm hug and expressed, “You made it, I’m so happy!” Needless to say, this quelled my usual pre-session nerves. She then guided me to her room and allow some time to make a quick change. We share some more conversation. She has such a youthful spirit given her experiences. She also has one of the most infectious laughs I’ve ever heard! I took this as a feature of her bubbly personality and natural disarming charisma. We shared a few more words,
then we bowed to each other, we slap five, we bump fists and got to be business end of our meeting.

We agreed to a playful Semi-Competitive session. I shared that I was trained and my #1 priority is the safety of who I share the mats. She believed my words because my actions followed and possibly felt more comfortable to “cut loose.” Our first round was a more lighthearted scramble as we were felling each other out. I was amazed at her skill and her ability to capitalize upon my mistakes. She laughed as she was surprised of the use of my hips. Who would notice right? LOL! She was able to take mount and pin me for a while. After some more scrambling, I somehow was able to take her back and applied a RNC. When she tapped I released immediately. We agreed that we would “respect the tap.”

The second round was more of the same. We engaged in a more playful and dare I say technical grappling and scrambling. She then unveiled one her best weapons: the Scissors Sweep! She has one of the most effective scissors sweep I’ve ever seen and now experienced. She caught me in a few of them. Around the last sweep she got me in I was able to sneak in an underhook and staple her in side control. I then pulled out one of own weapons: the Americana. She holds out for few moments to consider her options and then she taps again. We took a short 5-7 minute break to get some water and we talk some more. Both of us now glowing with sweat we share some more conversation about her career and life. Then suddenly Ms. Starr decided to ramp it up and exclaimed, “C’mon girl, get it together!” She seemingly transformed before my eyes and activated some dormant muscle. Whatever she had to do it worked. She claims the next fall by pinning me in mount and proceeds to smother with a body lock and modified Ezekiel choke combo. I knew now I was in for a fight. Sybil found some competitive fire to be stoked and use it throughout the duration of our session.

After a quick minute break we started again. She now is beginning to have her way with me with her scrambles and infectious laugh. I was mostly defending her and somehow got a opportunity to take mount. She shrimped away and gave me an opportunity to secure a head and arm triangle. This prompted Sybil to now fully cut loose! I knew that she didn’t care about the final result. However, two things were clear she DID NOT want to lose and she wasn’t going to go quietly without a fight. Sybil claims the next fall with many would describe as her finisher: The Body Leg Scissors. In my foolishness, I didn’t think her legs
were SO strong! What I did know was that she knew how to apply the tightest scissors I ever felt! Once felt my ribs touch my liver I tapped near immediately! We were near the end of our time together we share one last break and concluded our battle. Sybil pulled out the kitchen sink of her skills: scissors, sweeps, crossfaces, smothers, headlocks, wristlocks the whole nine yards. Sybil was able to lock another leg scissors, but I didn’t tap for some reason. After a sweat drenched 15 minute scramble I found myself in position for a final head and arm triangle lock. Both of us now exhausted and in delightful puzzlement of what we have experienced together. We still had a couple of minutes before time was up so we did one last roll around before Sybil scores another body triangle smother choke. We ended the match in each other’s arms and shared an impromptu post match cuddle. WOW!

We both mutually agreed that we would do have another match. To say that I enjoyed myself would be doesn’t even tickle the surface of this event! I’m still puzzled and smitten as to what exactly I was able to experience. Thus the difficulty of writing this review because my emotions are still not altogether yet. I suppose this is the effect of sharing the mat with a Multi-Sport, Multi-Industry LEGEND! If you were keeping score earlier the match score went to me 4-3. However, what matter to me more than “winning the match” was winning over a new friend! There’s not an amount of money that’s comparable. It’s a rare opportunity to come across a decorated star whose down to earth, a true martial artist and a truly phenomenal woman. Sybil offered an opportunity for us to meet; she provided me an one of a kind experience with a longing for more. I reckon that Sybil and I shared THE PERFECT SESSION! Do I recommend Sybil Starr for your next session? In but so many words, YES, without question and even less hesitation! May you have even half the FUN in your session as I had writing this review about mine because I had a ball! Sybil, thank you! I look forward to our next meet!

Don’t apologize. I love your review. It was a great match.

I want to tell EVERYONE about my AMAZING good friend Sybil Starr & my NEW equally AWESOME pal Lia Labowe!!!…. I know I just wrote about them on Lia’s page, but I had to show some love on my girl Sybil’s page as well…. Bottom line IS THIS!!… Go see either one or possibly both of them together if you get the opportunity… They can do it ALL… Competitive, Semi-comp, Role play & Fantasy…. Once you meet them U will like them & to know them is to LOVE THEM… Thank U once again, Sybil…. And you too, Lia-lol…..

The last time I have saw Sybil Starr was in Greece 2006 at a event of Fightingstyle where also my ex-wife (artemis) from Berlin Germany have participate , It was a great event with lot of great fights. It very nice I findyour profil here now on sessiongirls and nice that you still do wrestling , I hope we can meet soon ones when I will be in the USA in 2023 , so we can do when you are interested a mixed-wrestling match together.

I just had my 6th session with Sybil and she was fantastic. We started out with a little face setting and then we got down to the real thing. I asked for a beat down and Sybil gave me everything I wanted and. she hit me to both my face and belly, but was very care full not to hurt me seriously. Sybil is a class act and I enjoyed my session with her very much.

I have seen Sybil 5 times and I’ve never been disapointed. Sybil will give you your monies worth and she is very skilled and professional. She is well worth the money and I promise you that you will never be disapointed.