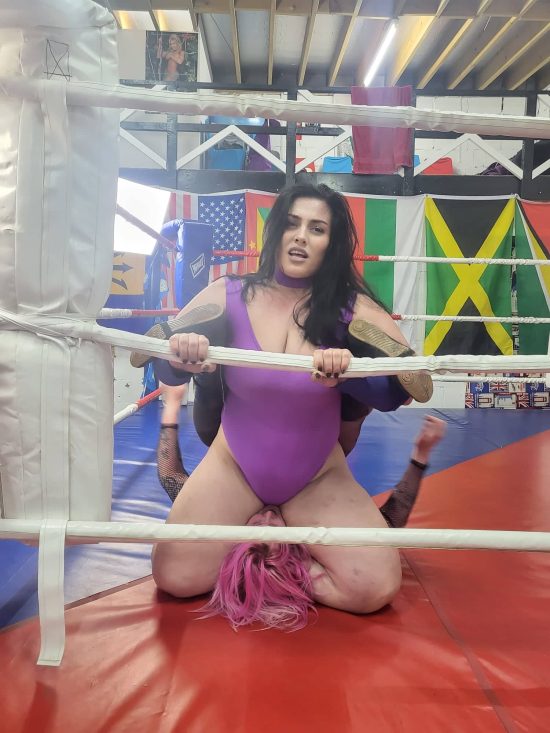 My name is Ina Black and I was formerly a professional Sambo wrestler, with silver medal at the European Championship, and bronze at the World Championship. Since 2010 I have been a regular wrestler at Monica´s Westling Centre in London, and a very good friend of Monica´s as well. I have my own clipstores that you might want to check as well, with mixed wrestling, female wrestling and domination.

Do you offer lift and carry sessions

After watching Ina’s videos for years and dreaming about getting a session with her, my opportunity came when she visited my city.
I sent her an email and she was easily able to accomodate the time I needed.
I couldn’t believe it, but she is even more beautiful in real life than her photo’s, and with her sexy accent on top of that, I just dropped to my knees and started to kiss her feet as soon as i entered her room.
The dangerous thing about Ina is she has a very sweet and caring personality, so it is easy to let your guard down, but thats when the dominant side comes out and holy crap can she dominate! She was just throwing me around like a little rag doll and putting me in hold after hold, and just laughed her ass off, while i begged for mercy. Her scissors are unescapable. With just one hard squeeze she could have very easily made my head pop off, but she knows exactly the right amount of pressure to apply, and always shows respect when you tap.
While she made me fear for my life a couple times, I came out of the session feeling great and not sore at all after, and ended up booking another session with her a couple days later which was even better than the first one. Definitely my new favourite session girl and I would recommend her to anyone!

I apologize in advance for the novel but I have to share my experience with Ina. Before I start with the session, the booking process was smooth and easy.

I was so nervous meeting Ina. I’ve been a fan of her for years so I was extra nervous/excited to meet her in person. All those nerves melted away when I got there and was greeted with a big hug and a smile. I truly felt welcome and not just another random client. Also it goes without saying but she is absolutely gorgeous and the outfit she was wearing was perfection.

Now on to the session. I felt I might be able to win at least one round since we were just doing fantasy/domination wrestling to start. Well, within the first minute any idea of that was lost as I was on my back, trapped under her tapping frantically. I continued to tap multiple times as she was able to submit me at will with a variety of holds. And when I was not tapping I was pinned or completely immobilized, unable to move any limbs she decided to trap. I quickly found out how strong and skilled really is. She was just toying with me at that point, even having me try to attack her while she was laying on her back or on her side. That did not go well for me. She easily fended off my feeble attacks and had me caught in submissions or pins with no chance of escape until I tapped or she counted a 10 count.

I must add that I’m a pretty big guy and she was tossing me around the mat like nothing even saying she could throw me from a standing position which I completely believed but didn’t take her up on it. In addition to her black belt skill (She has one btw) she is ridiculously strong. She could just hold me down by the wrists and I could barely move. Eventually, I asked her if this was semi-competitive instead of fantasy. She looked down at me (I was trapped in a pin at the moment) and shook her head with an evil smile. From there I knew I was toast. Less than halfway through a 2 hour session I had nothing left, I was done.

She is an absolute destroyer in the best way possible. Good luck to anyone brave enough to go fully competitive with her.

On to the rest of the session. During the wrestling and the rest of the session I had to take many breaks. I was panting and sweating (I don’t know if she even broke a sweat). I enjoyed these breaks as much as the actual session. She is so warm, kind and down to earth. We had great conversation and were even laughing hysterically at one point. But once the break was over she was able to immediately flip the switch back to a cold dominator; even submitting me with her legs while laying on the couch. The rest of the session was mainly domination (facesitting, smothering, worship) and it was amazing. Her sadistic smile as she stared down at me while I was trapped underneath her is burned in my mind. After feeble attempts to escape she would look down at me with that smile and just shake her head.

The end of the session comes (She is not a clock watcher btw). We have one last chat and I get another hug before I leave (she is an excellent hugger btw). I was on cloud 9 the rest of the day still in disbelief that I was able to meet one of my all-time favorites and that it was everything I hoped for and more. If you’re still reading this you owe it to yourself to have a session this lady if you ever have the opportunity.

PS – The next day my entire body including my jaw and face were incredibly sore. I could barely walk and it was the best feeling ever.