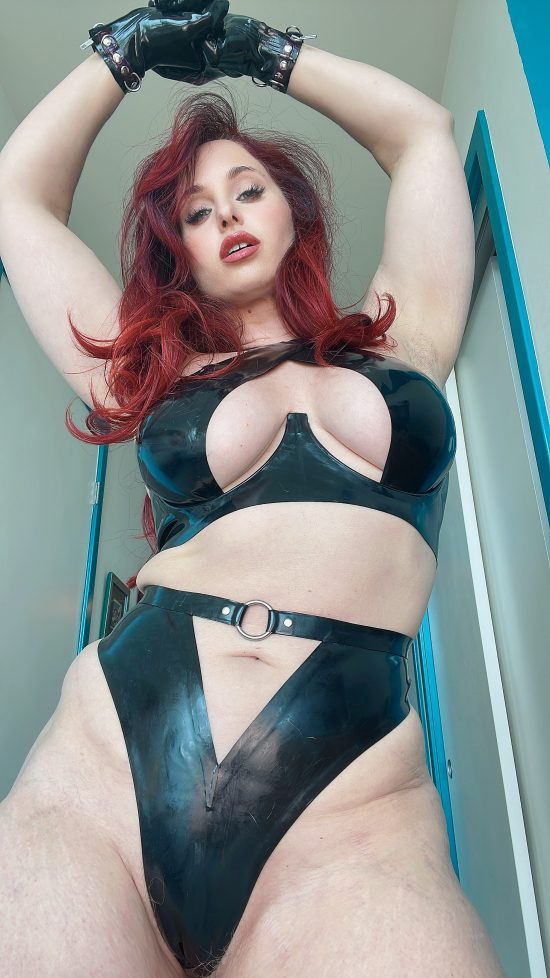 I know how to drop men to their knees (my ballbusting is brutal, for example!) and beg for absolution.  I will take your breathe away (my scissorholds are deadly and my facesitting is intense!), and relish in seeing your edge being played with.  My dominance comes in the form of the physical, as well as the verbal.  I weave fantasies; a talent I’ve honed in on over the years as a fetish model/performer.

I’m drawn to muscle domination because I genuinely derive pleasure from seeing you on your back…because I brought you there and can keep you there.  I also enjoy the physicality of it all: the sweat, the heavy breathing, my strong body entwined with yours.  However, this needs to be clearly stated, I will not consider any type of sexual contact/activity.  Do not disrespect me by ignoring this boundary.

I had recently sessioned with Andrea Rosu when she was last in LA. It was one of the most memorable experiences I’ve ever had. A warm personality whose easy to communicate with and in incredible shape. If you ever get the chance, you simply must meet her. Breathtaking.

n order to get down for a session with Andrea Rosu, I had to pull more than a few strings. I had to travel for nearly twelve hours to Florida, with a hurricane on the approach. I had to plan months in advance, just to get the exact right day. I had to spend a not insignificant amount of money just for the travel and expenses to make everything work.

I did all this because I believed Andrea Rosu would be worth it, and I’m telling you all this to let you know, up front, that I was 100% right.

Andrea is almost supernaturally beautiful, but I don’t have to tell you that – you’re on this page, you can see the pictures, you’ve watched her clips. But seeing her through a screen is such a hollow experience compared to meeting her firsthand. When she’s right there, standing in front of you, she practically glows. Her hair shimmers, you can appreciate the haunting perfection of her skin, and she comes across larger than life, with this overwhelming, unreal presence. It’s a difficult thing to put into words, and the best thing I can do to convey it is to say that she is 100% the woman she presents herself to be. Meeting her in real life is liking watching her walk off your screen.

But none of that would matter much if she didn’t excel at her job, and she does. Andrea is a professional, and she expects professionalism in return. She’s prompt in her responses to emails, getting straight to the point in a clear and concise manner, willing to listen to requests and leaving little ambiguity in the way things will go. When we had a small problem with scheduling, she was quick to help rectify things and kept our appointment, making sure to keep me abreast of any relevant changes. I was greatly impressed with the thorough, organized way she handles business, and it’s a method of working that I wish more Session wrestlers would adopt.

When it comes to the actual session, she was nothing short of perfection. She’s an attentive partner, and she took great care to see that I wasn’t pushed beyond my limits while still giving me an intense session. When we wrestled, she put her fantastic athleticism on display – she’s stronger than you might guess from her pleasing physique, teaming with muscle under her pleasing curves. Her legs are legendary, and they live up to the hype that’s been built around them – they appear supple and pleasing at first, soft to the touch, delectable, but then they wrap around you head and harden and you’re gasping for air as they keep growing, pressing into your body like a pair of steel pylons.

But as great as her legs were, I found her facesitting to be the main attraction. It may seem like a simple thing, but I’ve sessioned with quite a few women, and I strongly feel there’s a way to do it right and a way to mess it up. Andrea is certainly in the former category – in fact, I would go so far as to say that she’s one of, if not the, best facesitters I’ve had a session with. It’s not just that she has more than enough flesh to smother you with ease, but she knows how to shift, how to hold you down with it, how to give you just enough breath to stay awake and bring you to the edge. And all the while she just laughs and taunts you, perfectly setting the mood.

She also excels at more traditional domination. I brought along a box of toys to play with – whips, paddles, wax candles, even a small play taser, and she found a use for just about everything. She blindfolded me, tied me up with expert ease, then spent the better part of an hour driving me crazy, tricking my senses, leaving me anticipating the next burn, the next shock, the next strike. It made for an insanely exhilarating experience, and I can only imagine how much fun she would be in a fully stocked dungeon.

All in all, meeting Andrea Rosu was an unforgettable experience. I lament that I don’t live anywhere near here, and that I’m not too likely to ever have another session with her, but it might be for the best – if I did, I might not be able to resist obliterating my bank account just to see her as often as possible. If you’re fortunate enough to be anywhere near her area, I highly recommend taking a trip to see her – I can promise you that it will be a worthy, rewarding experience, one that will stick with you days, weeks, even months after you’ve parted ways. She’s a rare person, and despite writing all this, I don’t think I’ve done her justice. Only sessioning with her yourself can truly do that.

I had the opportunity to have a session recently with Domina Andrea. She is a very beautiful and strong woman who takes her role as a professional dominatrix quite seriously. Even as someone who is relatively new to any sort of session experience, I felt very comfortable, safe, and relaxed during my time with Domina Andrea. Her communication was clear and timely before, during, and after the session. The session itself was an hour of pure bliss as Andrea really makes a point to actively communicate during the session and make sure you’re getting the experience you desire. Her scissorholds and face sitting are very real and very intense. She exceeded my expectations and I find myself already trying to schedule my next visit with Domina Andrea as I write this review. If you are on the fence at all about having a session, I would highly recommend to do so as you will not regret the decision.

PS: Domina Rosu was also thoroughly professional, precise, and prompt in communications prior to our session. Afterward, she showed extraordinary kindness to me.

I’m a novice but Domina Rosu put me at ease and fulfilled my fantasy to a tee. She is physically overpowering. But what really stands out is her wicked domination in dialog. She knows just what to say and how to make submissions part of a larger humiliation.Her space in the Bay Area is full of evil toys as well as a wrestling mat

I recently had a double domme session with Andrea Rosu and Freshie Juice and it was an amazing experience. I was their dog during their session and I was trained into becoming their bitch. It was the first time I did a headscissor session as well and Andrea is incredibly strong. Whenever she had me in a headscissor or a headlock I immediately started tapping out. Whenever she really started squeezing I felt like I was about to knock out and it was great. She would also sit on my face unexpectedly and controlled my breath. My balls were also hurting quite a bit after this session. Being restrained while having my balls busted and being squeezed in between her thighs was an amazing experience. At the end I had a GS where I was basically drowned and I was covered in it, it was great. Both Andrea and Freshie had such great chemistry together too which only amplified the experience. I’d definitely recommend.

Andrea is a very strong and beautiful woman who is a blast to session with. She is very attentive to her craft, and very good at communicating both before and during the session to ensure that she is providing the type of session that you are looking for. She was strong enough to completely control me physically the entire time and witty enough to continually remind me of that fact.

Her legs and ass will make you submit whether you want to or not. We had our session together while she was traveling to LA and it was a great time! Looking forward to her return!

I saw Andrea on her visit to LA and she was fantastic. She was very receptive to my neck injury and was still able to give me the session I wanted. She is just as beautiful in person as her photos. Super responsive to emails and very accommodating with appointments and deposits. A must see when she visits your town!

One of the best sessions by far. She is extremely gorgeous in person and she’s very accommodating to what you’re looking for assuming you’re a civilized human being. I had this session a few months ago but I always think about how amazing that hour was. The way she moves is extremely graceful and her body is perfectly shaped and she is a work of art overall. One of the best facesitting sessions ever. Looking fwd to hopefully seeing her in the near future 🤞🏾

I met Andrea a few years ago for a session and she was amazing. Very powerful, beautiful woman. She hit my session interests to a “T”. There is nothing hotter than her smile looking down at you, while crushing you with those scary strong legs of hers. She caught me in a figure-4, and her rock hard calves instantly had me seeing stars.

I highly recommend her for a session and would definitely hit her up for a rematch, should the opportunity ever present itself.