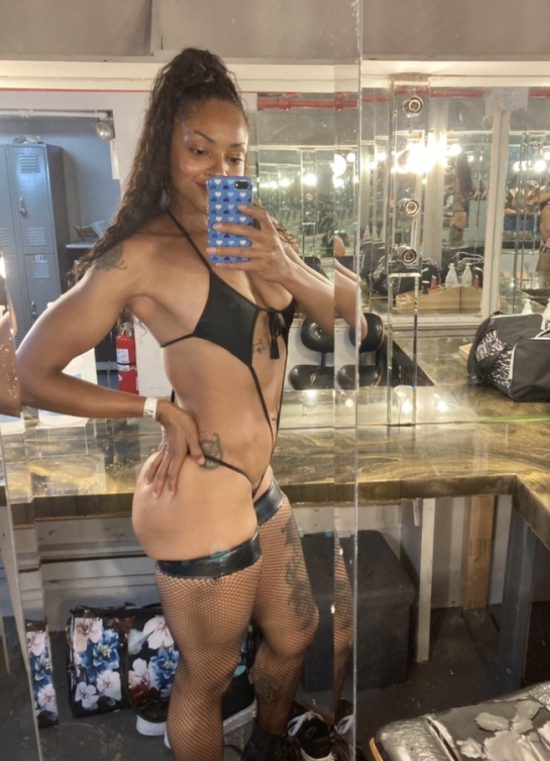 I am a mixture of beast and beauty. Sugar and spice, and everything nice, but don’t get it twisted THIS Goddess WILL put you in a hurt lock!!!  I will be attending the Women on Fire Wrestling Event June 10th in Chicago and look forward to seeing you there!!  Don’t be Shy! 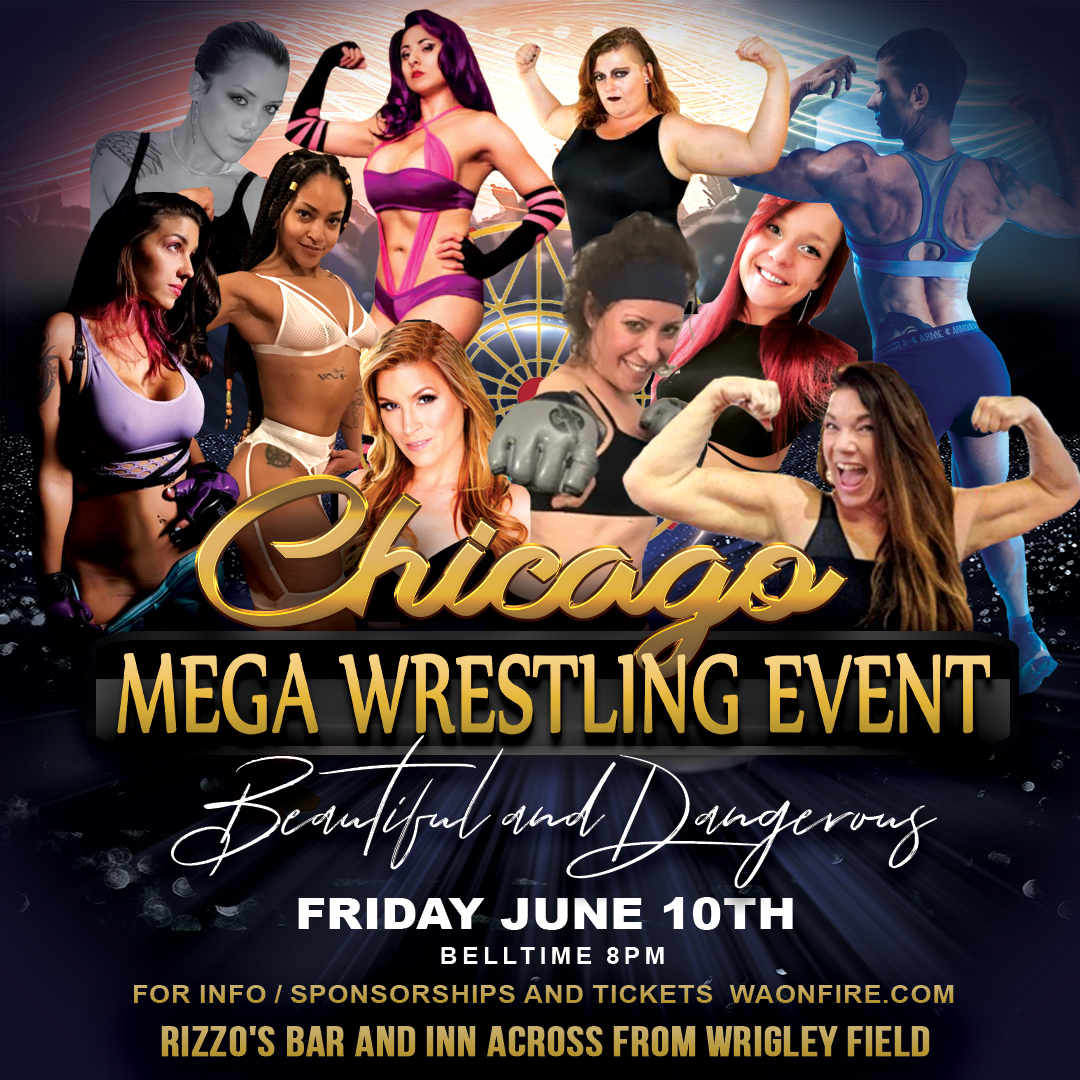 Session with me, and watch these bad ass babes go at it!

I’m sitting in my hotel room now, about an hour or so removed from my session with Venus. I usually digest a session more before I write something about it, but I felt like doing this fresh, while everything is clear in my head.

Venus is an amazing woman. That might come off as a strange thing to say about someone I’ve met physically once for less than two hour, but that’s really the force of her personality at work. The moment you meet her, you can feel this magnetic, uplifting energy that grabs you, and when you talk to her, you can figure out where that’s coming from. I know it’s tempting to speed through sessions – this isn’t a cheap hobby, and every minute is costing you dollars. But I think rushing through a session with Venus would be a waste of an experience – she’s got a great vibe, a sparkling conversationalist, and she has a way of settling you and making you comfortable that I’ve rarely seen in other session wrestlers. She can make you laugh, she can still your heart, she can get you excited, and so much in between. She’s fascinating and you can tell within minutes that you’re meeting a unique, engaging person. She’ll match what you bring – come at her with respect and you’ll get respect back, come at her with positivity and she’ll radiate that.

But she’s d not just an engaging personality, but a strong, competent wrestler. She’s stronger than she looks, and I would say she looks quite strong to start with. She’s athletic, with a solid, toned frame, and you can feel that raw power when you move into her. I stand at around 6 feet tall, about 180 pounds, so were fairly close in body size, and I could definitely feel her strength all over when we clashed – she has a great balance of power from head to toe, and I’d wager she could overpower most men at her height or lower, with the energy and stamina to outlast bigger guys. She’s flexible and quick, can swarm all over you, catch you with those legs and then…

Her legs, by the way, are quite powerful.  She spoke of a dancing background, and I definitely can believe that – when she clamped down on my head, I felt this crushing, oppressive power, muffling my ears and shortening my breath. She’s definitely has some of the most powerful scissors I’ve encountered, and I’ve met enough women for that statement to mean something – Sara Lips, Sheena, Veve, Kim Chi, Lora Cross, just to name a few. I’m not going to drop a top ten right here, but I could see her in the top five strongest scissorholds I’ve been in, and without a doubt in the top ten.

To say nothing of her facesitting, her chokes, the way she can pin you down and stare you down with those deep eyes and that sparkling smile.

There’s no shortage of session wrestlers in NYC, and I could’ve sessioned with others during my short trip here. I’m extremely glad I settled on Venus – sessioning with her was one of the best decisions I’ve made in my five or so years doing this, and if you give her a try, I strongly suspect you’ll be able to say the same thing.

This woman is something else! I had an amazing session with Venus. Aside from the obvious in that she is gorgeous and strong, she is a very nice person. I had my first session with her the other day and we instantly clicked. She is so easy to talk to and interesting and it just felt like two friends hanging out. If you visit New York or if she is in your city, book with her!

This is a girl with a combination of: power on the edge of scaring you off, Charming personality, And Breathtaking beauty.

Prior to the meeting, I asked for strength games. Although in light of previous sessions I had with other girls I did not develop expectations due to the fact that I am relatively strong and specialize in bodybuilding and train people for it.
and my self with some abilities (for example my bicep measure 45 cm).

As the meeting began I was in shock. Venus is stronger on different level from the matches I have had so far.

She lifted me so easy on her shoulders and did squats bending professionally almost to the floor.(I weigh 75 kg) and for her part she could continue reading a book as she goes on squatting.

Next the game of knee presses in four different positions. And a push competition.

Friends, you have no chance against her unless you are in the very top level in terms of power. She just dismisses you complacently and more humiliating with a smile.

Her upper body abilities are also among the highest I have came across.
Luckily I asked for a double meeting in advance, so we had enough time to carry out varied activities and even drink coffee.

Also will point out her Mesmerizing beauty and sculpted figure that stands in one row (not exaggerating) with fitness models at of the highest level. Which only adds to her amazing personality and the fantastic atmosphere she inspires.

Having met with Venus yesterday for the first time, I wasn’t exactly sure sure how the session would go. From the moment we met I knew I had made the right decision to meet with her. She is a beautiful, athletic young woman who is extremely strong and very personable. Venus put me at ease right away. Once the match started I quickly learned that she could submit me or pin me anytime she wanted. Venus put me through my paces, used me to demonstrate many of the pro moves that she knows and did it all with a beautiful smile on her face. She is very easy to talk with, during the few breaks we took, and laughed at all of my bad jokes.
I highly recommend her if you are looking for a fun time and plan to schedule another session very soon.

Without knowing very much about this lady, I went with my gut instinct and scheduled a session with her. She showed up to my place on time and arranging the session was very easy. When she arrived, she was dressed normal and very tall. She is very very beautiful and has a nice personality. At first she flexed for me under her clothes and I got to feel those baseball like biceps, and let me tell you, she is very strong and I felt a lot of muscle under those clothes. For the first time I caught myself blushing and giggling like a little school boy and very aroused at the same time. She later excused her self and got dressed up in an outfit she brought for the session which was more on the sensual side with light holds, nothing competitive. I couldn’t believe how strong her upper body is and it’s very cut. Beautiful arms, back and chest and such a cute face to go with those muscles and power. She has a very exotic look and her skin is the color of cappuccino coffee. Just a real treat to be in the presence of this beautiful strong amazon woman. I highly recommend her and will schedule another session with her very soon.

Awesome! Beautiful, strong, talented and accommodating. She aims to please and packs a hell of a punch, if that’s your thing. Great wrestler to. Must see!