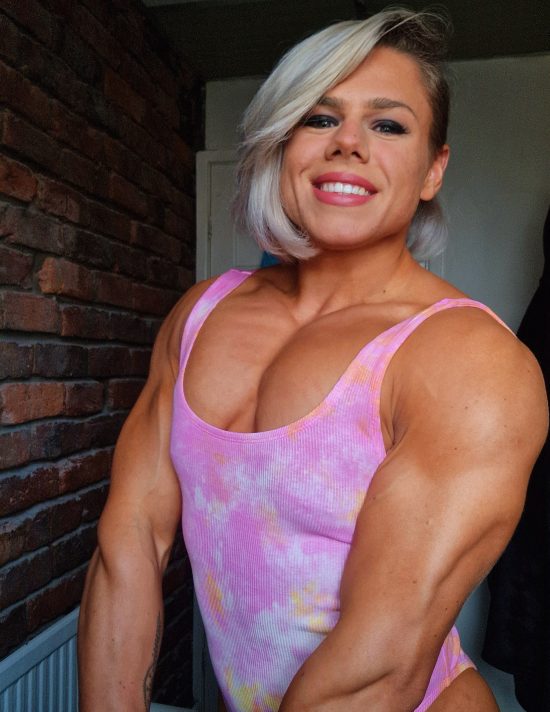 I had the pleasure of meeting Bernibernadetta in Manchester very recently for the second time. Let me say that this meet could not be better than before and it was sheer enjoyment. She has a real warm personality with a great sense of humour. Not only is she very beautiful, but muscular and extremely strong too. I’ve met 4 other women in the past 2 years and without exaggeration, Berni is the smallest in height and weight, but pound for pound the absolute strongest..
We started with a little roleplay, with me being playing a sceptical journalist, who was trying to establish that female bodybuilders are all show with no real strength, compared to an average man. Also that media shots are enhanced or photoshopped to make them look more muscular than in real life. This resulted in her counter arguments followed by examples of how wrong I could be. What ensued was one sided arm wrestling, light grappling, some lift and carry, then posing of impressive muscles especially biceps, triceps and quads. Her quads are world class, but what really surprised me again were her rock hard 13 inch forearms which bulged out three ways with clear separation and definition.
Her lifts of my bulky 81 kgs (179 lbs) seem effortless and forget the other tests of strength as I was humiliated in a fun way and I’m no wimp as a young at heart 60+ fairly fit example, of what I can now describe myself as the new weaker sex. On the hand grip machine, she recorded 115ibs with her right hand compared to my reading of 83 lbs.
Obviously what followed was inevitable real muscle worship and lots of insightful conversation.
Also prior to the meeting, the communication was also fun and she never kept me waiting long for any sort of reply. A must see for any admirer of strong, muscular beauties.
Thank you Berni, I’m still on a high and I can’t wait to meet you again.🙏🏼💖💪🏼😂

This lady is beautiful !!!!

Met Berni today and let me say that I fell under her spell. She is the personification of true female muscle beauty. I do not exaggerate, but her smile, her eyes and her model looks are what first hit me. She arrived to a planned roleplay scenario, with me being a male chauvinistic V.I.P. in need of a bodyguard. As the name I was given as the bodyguard was to be someone called Berni, I was expecting a man. When a woman turns up for the job, I had serious doubts about her abilities. She soon showed me that she was more than capable, when she took off her outer clothing to reveal a defined, shredded high level of musculature. Then she defeated me many feats of strength, such as arm wrestling, grip machine levels, pins and more. Then lift and carry, where her 72kgs lifted my 82kgs with much more ease than my poor attempts to lift her. Then lots of muscle worship and there’s lots of big quality, very hard muscle to worship, especially her quads, biceps, forearms, pecs and hamstrings.
Her personality was very warm and our conversations were enlightening and fun. I recommend a session with her to all lovers of seriously strong and muscular women. 💪🏼😊

Omg thank you so much ! It was so much fun I really enjoyed it and I look forward to seeing you soon 💗

My pleasure entirely. Roll on Miami and hope you have the best time. The restaurant at Crow Wood by the way was called ‘BERTRAMS’ 😊😘

My pleasure entirely. Roll on Miami – have a great time 🙏🏼😊

What an absolutely beautiful lady with an extremely sexy chest!!!